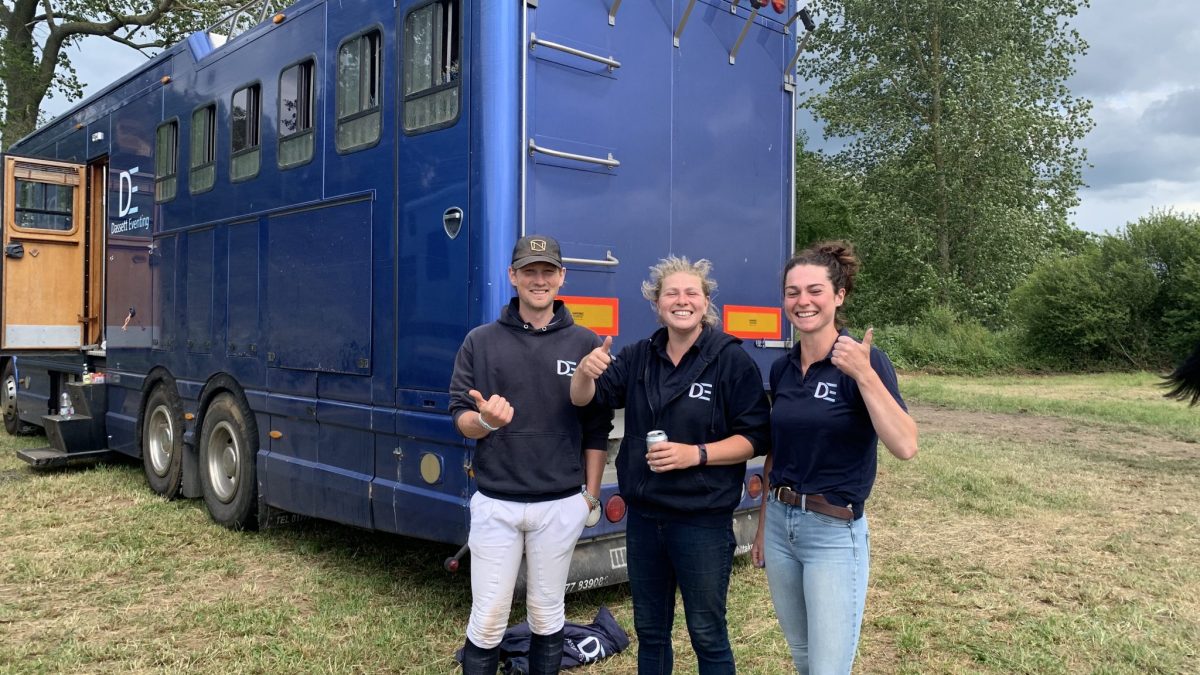 After a disappointing Houghton Hall, there was a very quick turn around for team Dassett as six horses headed to Shelford Manor on Bank Holiday Monday for a day of BE100 and 5YO qualifiers.

I rode HHS Dassett Class and my parent’s ex-racehorse, Dassett Gold, in the BE100. HHS Dassett Class did a lovely test for 28. So frustratingly, the last show jump fell; after a week of jumping 1.20m – 1.30m at Houghton Hall, the 1m seemed very small! It was a very cheap and unlucky rail that so nearly stayed. A much more confident clear cross country round well inside the time ended HHS Dassett Class’ day in 2nd spot…would have won without the rail! Dassett Gold also did a very good test for 29. Again, the last show jump fell after jumping a very accomplished round – clearly I need to practice last show jumps! A few green moments in Dassett Gold’s clear cross country round gave us 1.6 time faults, but this was still good enough for 6th place.

Craig was riding Dassett Empire in the BE100 and he continued his good run of form, finishing on his 31 dressage for 5th place – this horse really is a very impressive jumper. Craig also piloted another top jumper, Dassett Curra Candy, to 5th spot in the BE100 5yo section. This gorgeous mare also scored 31 in the dressage and looked so accomplished for a classy double clear inside the time.

Amelia had a couple of slightly greener rides in the two stunning 5yo, Dassett Rock Star and Dassett Select, both in the BE100 5yo section as well. Dassett Rock Star wowed the dressage judge for a very impressive 26! He then jumped a green but very impressive double clear, just adding a few time faults to his score thanks to all the extra wiggling between the cross country fences! Sadly the time faults dropped him to 4th place, but Amelia did a fabulous job to steer him clear around his first BE100. His jumping round is attached to this blog. And not to be left out of the rosette action, the super kind and genuine (hence the nickname Mr Perfect Pants!) Dassett Select also finished in the top 10, bringing home 9th. He did a good test with just a couple of mistakes for 32. Dassett Select then had his fist rail ever in the jumping (!!!), so added 4 faults, but was incredible cross country. Watching his round, I could not believe this is only his second time at this level. He jumped a lovely clear with just 1.6 time faults.

As I think I have said before, it is such a wonderful feeling to watch our young horses tackling these events and feeling immensely proud to own them, and to have them all bringing home prizes was icing on the cake and a great team effort. Talking of team efforts, the team manning Dassett HQ had a rather epic day, with 12 horses worked plus a trip to the gallops – well done guys!