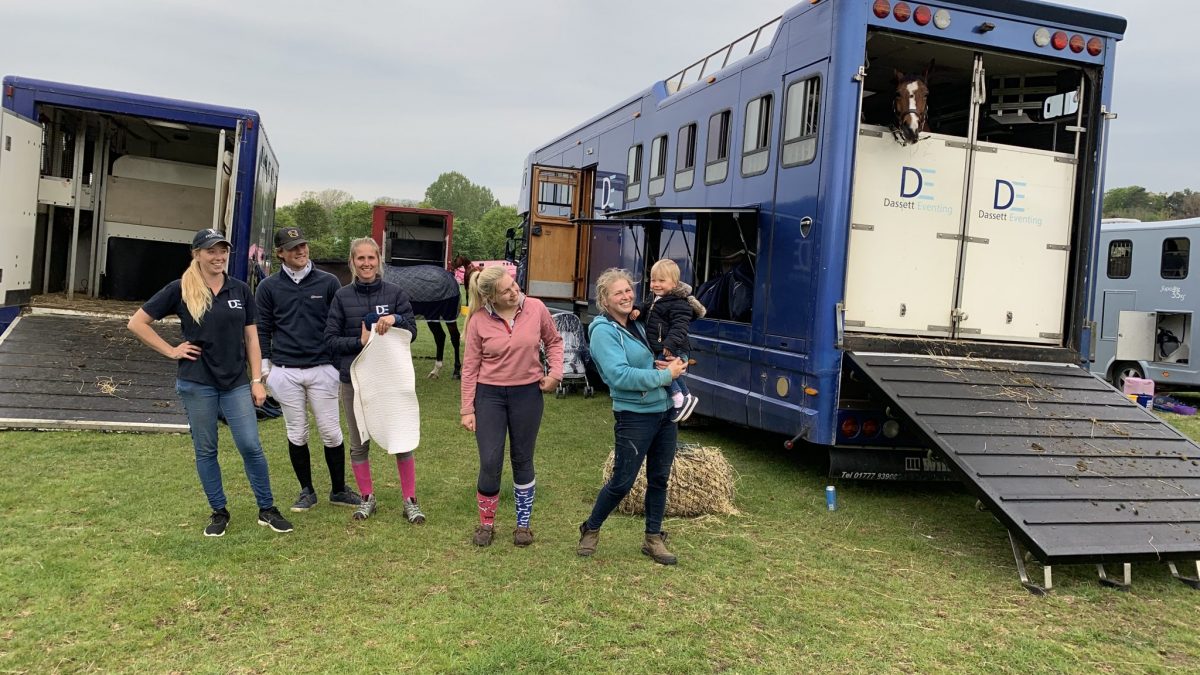 It’s been a busy few days with some of our older horses competing at Withington Manor over the weekend, and the mid week being filled up with two lorries full of young horses at Moreton Morrell.

Craig rode the super talented 7 year olds, MBF Dassett Legacy and ARD Dassett Spectre, around their second Intermediate at Withington Manor. ARD Dassett Spectre did a lovely test, but a few very genuine mistakes put them on a mark of 36. He followed this up with brilliant clear rounds in both the show jumping and cross country – such impressive rounds given his age and lack of experience at this level. MBF Dassett Legacy also did a great test, but with no major mistakes and finished phase one on a competitive mark of 30. He also jumped a faultless clear round show jumping and cross country, and given his competitive dressage score, Craig kicked on for only 4 time faults which was good enough for 2nd place! Both 7 year olds really put their best feet forward over the weekend and are such exciting prospects.

I withdrew Dassett Jack from the OI as it was only a spare entry incase he didn’t run at Burnham Market (which he did very well). This left me with SVS Dassett Enterprise and Drombane Dassett in the Novice. SVS Dassett Enterprise did a lovely test which perhaps could have been a bit bolder – and sadly the judge really thought so, giving us a disappointing mark of 36. He followed this up with another very convincing double clear. I have been struggling with his balance at speed and tried a new bit – it wasn’t much good so back to the drawing board! This resulted in cross country time faults dropping us out of the placings. Drombane Dassett did a much improved test, but was somewhat distracted by the show jumping over the hedge, and ended up on what we felt was a very harsh 42! He also jumped a smashing clear show jumping and was exceptional cross country, especially given how few runs he has had. Both these boys now head to Chatsworth for their first International, the CCI-S2*.

A few days later it was on to the local Moreton Morrell with 8 Dassett babies in the BE100. Craig rode the exceptional jumper, Dassett Empire, and they did a smart test for 30. Despite jumping over the top of the wings over every fence, one major spook at fence 4 resulted in a stop and quite a few time faults, dropping this pair out of the running. They followed this up with lovely clear cross country, using the option for a steady school to work on containing all this horse’s natural power. Craig also rode Dassett Curra Candy in her second BE100; they did a good test for 34. When this tall mare develops her balance and Craig can ride her more forwards, the marks are sure to be very impressive. They had one unlucky rail in the show jumping when they got in a bit of a muddle into the double, but followed it up with a lovely clear cross country. Craig’s third and final ride was on Jane and Jeff Boon’s Caramba Z; this horse was not on his best form for the dressage and was a little lucky to come away with a score of 41! The first part of the double also came down for Caramba Z, but his round was much improved on his last run at Goring Heath. Having had a brilliant cross country round, Caramba Z took a bit of convincing to get into the water, so added 60 penalties to his score, but finished well.

Amelia had a busy day riding two of her own horses and three for team Dassett, including two first time BE100 horses. She rode Dassett Select, who did a lovely test for 31 and followed it up with such a mature double clear for 8th spot! Dassett Rock Star did an immaculate test for a very impressive 26. A mis-communication on striding down a line resulted in 4 faults in the jumping phase, but it’s safe to say Dassett Rock Star jumped his socks off, especially considering this was both horse’s first time jumping on grass. Dassett Rock Star has missed some work so we didn’t run him cross country, but he the experience of the first two phases will have set him up well for this up and coming BYEH classes at Chatsworth and Rockingham Castle over the next few weeks. Amelia’s third Dassett ride was CSF Dassett Decoy who did a good test for 31 and jumped a lovely double clear to finish 8th in his section. This talented horse heads on to his first Novice at Aston next week.

My two rides were contesting their second BE100s. HHS Dassett Class did a very smart test for a great mark of 27. He jumped a lovely clear show jumping but sadly had a major spook at the first cross country fence and I didn’t even get close to it! So 20 penalties were picked up, obviously dropping us right out of contention. My father’s ex-racehorse, Dassett Gold did a lovely test for 32 and also jumped a great clear show jumping, despite being quite the bucking bronco between fences three and four! Although a bit green on the cross country, he was great and is a very exciting horse for the future.

Top effort by the team all week to get so many horses successfully competed. We have a quite weekend at home before Aston and Chatsworth next week.